At times when i’d be gardening, picking luscious blueberries to add to my morning yogurt, or just lounging around in the back yard my ears would turn to the most curious of sounds emanating from the house behind me. Sometimes it sounded somewhat like a dog’s bark, other times more like

the cry of an infant. Whatever the call, the two monkeys birthing these sounds were indeed rascals. i’m not sure what type of primates these were, but i estimate the little poo-flingers were about 18 inches in height and weighed between 7-10 pounds.

Their cage butted against a window that was often open during nice weather, to which the simian scoundrels clung to and shook themselves with fury. i was glad they were safely behind thick wire and glass. Especially as

they would keenly fix their eyes on my every move, observing me in my natural habitat …mowing the lawn.

Still, i never experienced what the good people of Fremont, Ohio had to endure as they suffered at the hands of one of these tiny tyrants. Last week, it took several police officers more than three hours and discharging of weapons to subdue the angsty anthropoid. …Really?!

Maybe i should change this to Wiersma Wednesday. Just a thought.

Slow news day in Fremont, OH or should there be a monkey business ban? Monkeys in your neighborhood? They’re certainly in mine.

Well, a group of New York City dwellers found themselves coveting a bike. Not a shiny new gold plated hybrid mountain sportster, nor was it a finely tuned multi-gear racer. Nope! Just your ordinary Department Store $70 two wheeler. But nothing was going to stand in the way of of these ingenious ruffians from obtaining the object of their desire. Not even the tree it was chained to.

OK, be nice now… but what really spins through your mind when you saw these rocket scientists work their cunning thievery?

Concerning The Beatles, John Lennon once exclaimed in an interview, “We’re more popular than Jesus now.” Arguably, he was right. Now before you pelt me with baseball-size rocks and pointed projectiles, let me qualify that in a cultural sense he was absolutely right. The Beatles were more influential upon adolescents, art, and music culture than anything in their time. They were a phenom beyond others. However, there really is no comparison, Jesus will forever obscure The Beatles in every significant manner, culturally and historically. Matter of fact, Jesus is actually bigger than Jesus. I have proof. 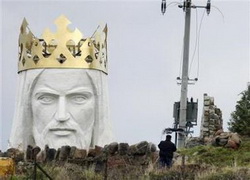 It seems that builders in Swiebodzin, Poland are erecting a Jesus statue. A Catholic Priest conceived the idea some years ago of a Giant Jesus. The project is expected to be finished shortly. When complete the plaster and fiberglass statue will stand 33 meters tall (108 feet for us Westerners) and placed on a 19 meter high mound. That will make the total height of the statue 52 meters (57 yards).

i gotta get me one of those!

i’d like to see John, Paul, George, and Ringo just try and get their own 100+ foot tall mega-monuments.

What do you think about this? Is there good cause for a monumental messiah? (For some reason i can’t get They Might Be Giants’ “The Statue Got Me High” outta my head.)

This is going to be the official start of Weird Wednesday. Every Wednesday i’ll post a… well, you get the idea.

i was having a discussion with my nineteen year old daughter a few months ago, as she was contemplating getting a tattoo. We discussed placement and such, as it may be best to have them hidden for certain work environments. As we talked it was clear that she really didn’t care if her tats showed. Therefore i recommended she put a tattoo on her face. She was surprised at my suggestion. i reasoned, if you want people to see it, then what better location than on your cheek or forehead. She was appalled, affirming that she would never get a tattoo on her face. ”Why?” i queried. She continued to explain why she thought it would be inappropriate. i then asked why the other placements she had in mind would be appropriate? Silence.

In case you had not heard, in the movie sequel Hangover 2, one of the characters gets an exact replica of Mike Tyson’s face tat. Incidentally, Tyson made a cameo appearance in both the new film and its predecessor. The original artist who designed the tattoo is suing the filmmakers for copyright infringement. 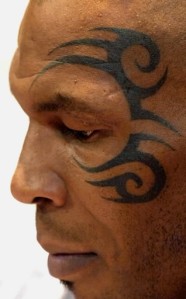 i believe in freedom of expression as long as it doesn’t hurt yourself or others. i certainly believe in copyright. But i’m not exactly sure that the current controversy concerning a copyright infringement of Mike Tyson’s face tattoo is really worth the trouble. i’ve come to the conclusion, that whatever the outcome, the artist is getting plenty of PR and probably already has gained fair amount of business based on his original work on Tyson. But who really needs a face tat?!

Despite new tattoo trends such as using fluorescent ink, coloring the whites of the eye, inking the tongue, palate, and teeth, I’ve seen some incredibly magnificent body art and then there’s … well, not so magnificent. People get tattoos for a multitude of reasons, but usually of some personal significance: spiritual; military; sports; in memorial or to honor someone living or dead. Increasingly, people are getting them “just for fun” or, after indulging a few too many adult beverages, get “mistake” tats. Let’s hope the following fall into the latter category. 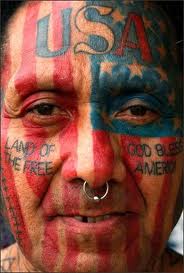 “Can I get ‘Freedom Fries’ with that?”

Every zombie knows brainz is tasty!

Even better when the hair grows out. 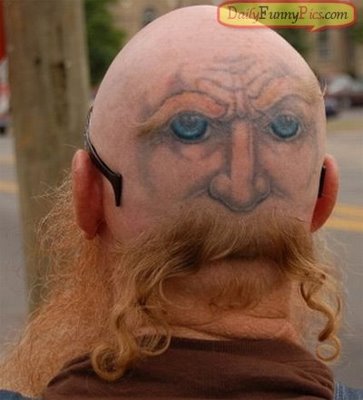 Gramps is always keeping the kids on their toes.

Definitely a mistake! This teenager made headlines when she tried to sue the artist, saying she fell asleep and woke to 56 stars on her face. When the artist counter-sued she confessed that she asked for them, but lied to her father about it in the midst of his rage.

Eye chart on the back, periodic table on the front. 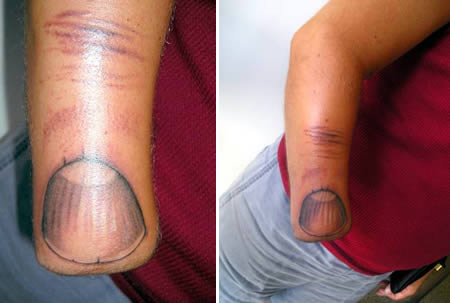 New meaning to “giving the finger.”

Just don’t let him near the sandbox.

What are your own captions, comments, concerns, or commends?